Emmanuel Macron suggests building its own army to protect Europe against the U.S., China and Russia. But it was Germany in World Wars One & Two – How did that work out for France? They were starting to learn German in Paris before the U.S. came along. Pay for NATO or not!

So, there’s a lot going on here.

First, of course, is the rueful and mirthlessly gobsmacked chuckle that comes thinking about Trump putting his great brain into high gear. There is no doubt he thinks he’s making a hell of a gotcha here, that France maybe forgot they fought Germany in the wars, but that he, Trump, who knows history maybe better than anyone, reminded them. Checkmate, Pierre!

There are a lot of things to say about this, primarily that Macron probably didn’t forget the war, since he was at the goddamn memorial services Trump skipped out on. But there is actually something more interesting going on here, and it is the heart of Trump’s fallacy.

The central idiocy of this tweet, of course, is that Trump is saying that Macron shouldn’t want a European defense league in case Germany tries to get rowdy again, which is weird, since Germany would be part of that league. In theory, this could make sense: the post-war order was designed to, essentially, curb German ambitions by integrating it fully into the Western alliances. If that world order crumbled, Germany could become aggressive again, and turn its eyes across the Rhine.

That to me is the point of what Macron is doing. The US is openly trying to get out of the alignments that have been a primary reason why the Rhine has gone uncrossed for 70 years. Macron is trying to protect that order, and if he can’t, find a system to replace it.

Macron clearly remembers the lessons of the wars; that’s why he is desperately trying to find a way to maintain some system to keep that in place. He sees Merkel is stepping down, the UK is caught up in Brexit, countries like Poland and Hungary have been taken over by far-right anti-democratic parties and charismatic psuedo-populists, that Austria and Greece have their own issues with fascism, and that he barely staved off a right-wing anti-modernity force of his own.

That’s the interesting thing about Macron. His corporatist-wienie techno-optimist venture-capital-suited bloodlessness is, I think, tempered by the knowledge that none of this has truly made a new Europe. It hasn’t made Western civilization peaceful or truly pushed us past the centuries of fighting that ravaged the continent. He seems to know that this is a blip, and that 70 years of peace is nothing compared to the hundreds of years of war that preceded it.  He seems like a man who has realized his treasured philosophies won’t beat back the demons of nationalism and blood.

This isn’t to say he’s a hero; he still seems to lean toward a jargony b-school style of politics. It’s that he knows this moment is dire. Angela Merkel knows it too. They don’t need history lessons from a barely-literate old sofa of a President; they certainly don’t need those lectures from someone who is trying to destroy the system that has kept their countries at peace.

It’s a sign of how much we’ve gotten used to the insanity of the Trump era that this tweet it taken largely in stride. I am sure that Macron and Merkel are now just shaking their heads. The President of the United States is openly trying to break of NATO unless he can run it as an extortionary wing while undermining everything it purportedly stands for, skipping out on meetings with our allies but giving his cheesiest jabroni grin at the man squeezing Europe from the East. 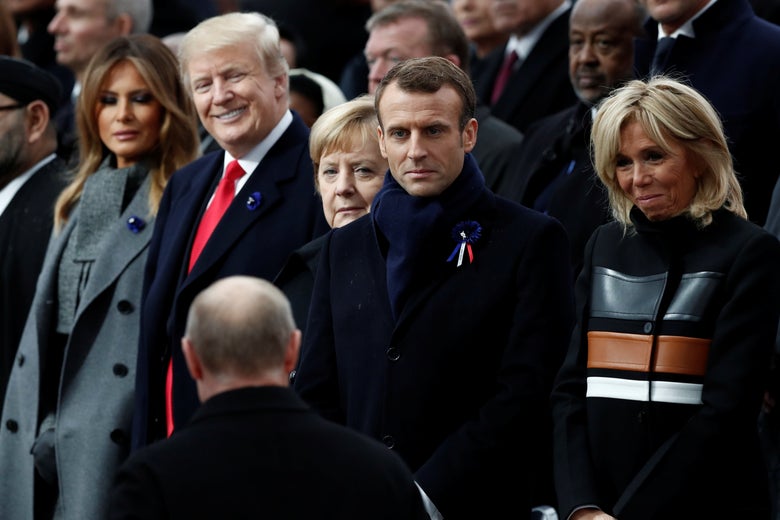 This would be a diplomatic scandal in any other time, and would scream across headlines around the world. But how can there be a scandal? How can there be malpractice when the patient is already dead? Trump has made it very clear what he actually thinks about the alliance. He wants it gone so that he can play big power politics unconstrained by any norms.

It’s not so much philosophical as it is instinctual and narcissistic: no one can tell him what to do; no one can make better deals. That his grotesque pathologies match up with this terrible authoritarian moment isn’t exactly a coincidence- the world has been moving toward his oafish cruelty for a few decades, much as American politics has lined up with his dimwit vanities- but it is good luck for other authoritarians.

It’s a cruel and needed reminder that we don’t get to live outside of history. We just have to try to see it while we’re in it.