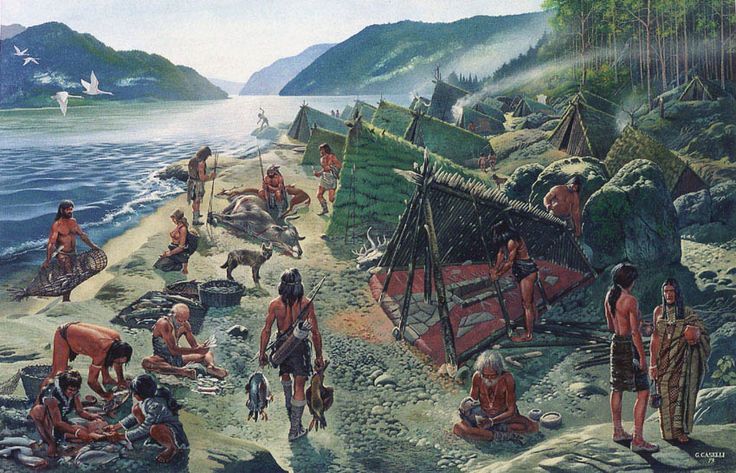 This picture might be overly bucolic, but there is no Fox News

In this week’s New Yorker, John Lanchester has a really interesting, humbling, and depressing read about how civilization turned out to be really bad for people in general. It made us unhealthier, more stressed, and, though he didn’t say it, downright meaner.

He says outright that the Neolithic Revolution is the worst thing that’s ever happened to humans, and that if we had slowed our roll a few hundred thou after harnessing fire, we’d be much happier.

That isn’t to say we’d be stupid. As Lanchester points out, there were literally thousands of years after the dawn of agriculture but before the rise of city-states. This was a time where there was art and some religion, mythologies, and knowledge about how the world worked. People, it seemed, didn’t resist collecting into civilization because they didn’t know how, but because it didn’t seem to make sense.

The whole article is really interesting, and points to some fascinating-sounding scholarship, but this might have been my favorite part.

The study of hunter-gatherers, who live for the day and do not accumulate surpluses, shows that humanity can live more or less as Keynes suggests. (Affluence without abundance- ed) It’s just that we’re choosing not to. A key to that lost or forsworn ability, Suzman suggests, lies in the ferocious egalitarianism of hunter-gatherers. For example, the most valuable thing a hunter can do is come back with meat. Unlike gathered plants, whose proceeds are “not subject to any strict conventions on sharing,” hunted meat is very carefully distributed according to protocol, and the people who eat the meat that is given to them go to great trouble to be rude about it. This ritual is called “insulting the meat,” and it is designed to make sure the hunter doesn’t get above himself and start thinking that he’s better than anyone else. “When a young man kills much meat,” a Bushman told the anthropologist Richard B. Lee, “he comes to think of himself as a chief or a big man, and he thinks of the rest of us as his servants or inferiors. . . . We can’t accept this.” The insults are designed to “cool his heart and make him gentle.” For these hunter-gatherers, Suzman writes, “the sum of individual self-interest and the jealousy that policed it was a fiercely egalitarian society where profitable exchange, hierarchy, and significant material inequality were not tolerated.”

This egalitarian impulse, Suzman suggests, is central to the hunter-gatherer’s ability to live a life that is, on its own terms, affluent, but without abundance, without excess, and without competitive acquisition.

What really strikes me about this is how hunter-gatherer societies embrace and understand the role of luck in life. Think about it. You could be an amazing hunter, but if something else spooked the animals, they’re off and running before you unleash and arrow. You could throw a spear perfectly, but if the gazelle zigs left instead of right, it falls clattering to the earth, pointedly and pointlessly.

So much in life is about luck, chance, and circumstance. You could stumble into some sweet hunting grounds or be born rich. You could watch the prey you’ve been stalking get freaked by a bird and run off, or you could grow up in the shadow of industry that’s poisoning your water and putting lead in your brain, limiting opportunities in life.

Things happen. As we’ve grown as a species, we’ve invented new ways to heighten the role of luck, the roll of the dice. Capitalism exacerbates this, with all its talk of meritocracy. Racism, prejudice, and borders make it stronger. Where you are born and to whom you are born make more a difference than who you are.

Hell, luck can extend to the random sequencing of a genetic code, a little glitch that makes you sicker or weaker or less able to rise up. That’s luck.

Paul Newman, in talking about his camp for sick children, had one of my favorite quotes about luck in life.

No! You’re not allowed to be this handsome and wise!

“I wanted, I think, to acknowledge Luck: the chance of it, the benevolence of it in my life, and the brutality of it in the lives of others; made especially savage for children because they may not be allowed the good fortune of a lifetime to correct it.”

And we’ve set up a society that refuses to recognize that. We’ve set up a society where the national myths are that you deserve your fate, and that there are many people who deserve to suffer. If they are suffering, ipso facto, they must deserve it. And they should suffer more, so that the luckier, who never consider their fortune anything just the justifications of virtue, can have more.

You may have recognized this as a summation of the Republican platform. It’s made crystal clear in their multiple attempts to repeal the ACA (and how goddamn happy Paul Ryan was when he thought he did).

Because that’s what repeal really is. It is saying that if you work three jobs, none of which have health care, you don’t deserve it. If you have a pre-existing condition, that’s too bad. If you live in a state with a Republican governor, too bad. If your cancer becomes metatastic and you can’t afford care, well, them’s the breaks.

That comes from the inability to understand that life is about luck. It’s about the driver looking up just in time to slam on her brakes before she t-bones you. Another second, another half-second, and you face a lifetime of therapy and mounting bills. There’s no virtue there. That’s only chance. The same as if you had entered the intersection a half-second earlier and were in her way.

Our system shouldn’t be about ignoring luck. It shouldn’t imagine that the person who happens to have the most meat at any given moment is the bravest, the best, and the most worthy. Our adherence to that superstition puts us far behind hunter-gatherer socieites. We’re less wise, less moral, and less knowledgeable about the world. We’re just less.

(h/t to Allison, Dee, and Bill Breeding for the breakfast conversation about this piece that made me think about luck and who we are. Always my favorite people to talk to.) Pictured: Not the US

It’s been a big couple of day for people pointing out Iran’s involvement in Yemen’s cruel and generationally-destructive civil war. The Times had a pretty big story about it, relying on the unbiased reporting of the United States.

The top American admiral in the Middle East said on Monday that Iran continues to smuggle illicit weapons and technology into Yemen, stoking the civil strife there and enabling Iranian-backed rebels to fire missiles into neighboring Saudi Arabia that are more precise and far-reaching.

Iran has been repeatedly accused of providing arms helping to fuel one side of the war in Yemen, in which rebels from the country’s north, the Houthis, ousted the government from the capital of Sana in 2014.

The officer, Vice Adm. Kevin M. Donegan, said that Iran is sustaining the Houthis with an increasingly potent arsenal of anti-ship and ballistic missiles, deadly sea mines and even explosive boats that have attacked allied ships in the Red Sea or Saudi territory across Yemen’s northern border. The United States, the Yemeni government and their allies in the region have retaliated with strikes of their own and recaptured some Houthi-held coastal areas to help blunt threats to international shipping, but the peril persists, the admiral said.

This is an…interesting spin on this. To be clear, it is almost certainly true. Though initial Iranian involvement in the Houthi conflict (dating back to 2004) was clearly exaggerated, as there weren’t any real links between the Houthi version of Shi’ism and Iran’s Twelverism, Iranian influence and involvement have grown disastrously.

But one of the main reasons Iranian involvement has grown is because of increased involvement by Saudi Arabia, its regional and sectarian rival. Saudi Arabia wanted to break the Houthi rebellion and support their chosen President, and so invaded, with horrifying results.