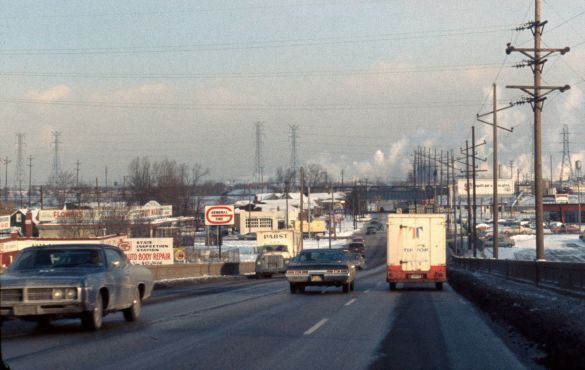 East Chicago, 1972, around when the present began to crumble. Image from blog.hemmings.com

East Chicago is one of those strange places that most of us only glimpse while driving past it, along its southern end, on a road trip that takes us through the rundown broken-factory grime of northwestern Indiana. If we’re going toward Chicago, it’s the last in a string of scary and polluted cities before you approach the rusted majesty of the Skyway, looming at imposing and strange angles, like a bridge out of Hell. More recently, East Chicago is the home of a booming casino. You get off 90 to get there, on what is essentially a designated highway, skirting the town itself. East Chicago just exists as a string of industrial lights and smoke glowing through the darkness.

It isn’t that, of course. It is a real city, where people live. It’s still a fairly-thriving Lake Michigan port, a beneficiary of this vast body of water, so crucial to the American experiment. It’s proximity to the lake, and to the Calumet and Chicago rivers, gave East Chicago some prominence in the steel industry, and its factories provided jobs and a living, even if a dirty and difficult one. Other industries bloomed in the area, in the days where Gary was a town to behold. But that legacy crumbled, leaving poison in its wake. This poison is metaphorical, but also terribly literal: East Chicago is facing a massive crisis in its drinking water, the weight of the past seeping into the present and darkening the future. It’s a reckoning with which we all have to deal.

The “Indian burial ground” is a common pop-culture trope, at least since Poltergeist, and maybe before. The idea is pretty simple: we developed on something sacred from the past, and our sins caught up with us. The burial ground is very literal, but the metaphor doesn’t need to be. All of America was built on the someone else’s grave, the wreckage of a culture, and the extermination of people. There is a certain sin everywhere. Our society was created on the bones of another people’s apocalypse.

You can feel the weight of this in Northwest Indiana and Southeast Illinois, on a number of levels. Driving through it is a sobering and saddening thing. I remember being young and going past it– this was still when the factories were open, though they were beginning to shutter. I shuddered as well: the smoke, the glaring lights, the ruined land. It was weird to think that this was once beautiful prairie, moving gracefully to the lake. It was strange to think that where this tumbling wreckage of a factory slumped, welcoming you to Illinois, natives once roamed. It was taken, and turned into this wasteland.

What I didn’t think, in my patronization, was how for many this wasn’t always a wasteland. This was a livelihood, a home, a life. I didn’t realize how that life was going away, leaving in its wake poverty. There are still industries, but the heyday is long past, and the region has been struggling to revive for more than 30 years. Casinos only do so much, and maybe very little, and schemes like the Gary Airport failed to deliver on their promises. Indiana pretends it is Chicago’s problem, and we do the same.

So it is a double failure, multiple burdens of history. Extermination was followed by environmental degradation, which was followed by economic dislocation and the people-shattering force of global capitalism, the decline of unions, and industries more concerned with the shareholder value than workers or communities. So what is left?

Lead. Arsenic. And the most vulnerable communities struggling to maintain the most basic and vital of resources. This is from the Chicagoist article:

Roughly a month ago, the Environmental Protection Agency blanketed yards in the West Calumet Housing Complex in East Chicago with signs warning children not to play in the dirt. Tests undertaken by the agency had found high levels of lead and arsenic contamination, almost certainly caused by now-shuttered factories that once dotted the region. Now the EPA is directing its attention away from digging and toward finding new residence for the roughly 1000 people who live there, the Times of Northwest Indiana reports.

Local officials became aware of the problem just this May, after the EPA shared test findings with East Chicago Mayor Anthony Copeland. This despite the fact that the EPA discovered elevated lead levels way back in 2012. Given the arguably negligent governmental response plus the fact that vulnerable children have found themselves in danger—nearly 700 kids live in the West Calumet Housing Complex—the situation has drawn comparisons to the Flint water crisis.

Officials are also trying to determine what will become of the land where the housing site currently stands. City Attorney Carla Morgan said that EPA delivered a letter this week to the city of East Chicago in hopes of hammering out a plan for the future, according to the Times of NWI.

Still, the immediate need of relocation remains somewhat up in the air, even after nearly a month has passed since Mayor Anthony Copeland sent a letter urging residents to “temporarily relocate your household to safer conditions.” But even though an exact timeline for relocation remains vague, things now appear to progressing further: HUD on Friday said that nearly $2 million federal dollars had been allocated to East Chicago Housing Authority with which to provide housing vouchers.

This is the legacy with which we have to reckon, as a nation. Flint, East Chicago (and a lot of Chicago): none of this “just happened”. It isn’t a natural disaster, nor was in unforeseeable. In the name of industry and growth– the justifiable names, mind you– we put literal poison into our drinking water, and in the name of the naked hand of capitalism we left that poison to those who could least afford to deal with its consequences.

We left it in the ground, where we let it seep into corroding pipes, neglected through lack of will and a lack of concern. We privatized health, letting those who could afford to live in richer towns have access to safe water, while those who didn’t were made to suffer. We destroyed the future of thousands, stunted as they were by being made to drink this poison. We took the most elemental aspect of life– water– and made it dependent on being born to the right class.

As a nation, we all drive past. We all get off the Skyway and speed through, maybe looking sadly around, maybe not even noticing. Maybe just complaining about traffic, and hoping to get to the next stop. That’s our national legacy. We want the past in the rearview mirror, and those suffering from our human decisions to go away. We have to deal with this, and need the national will to rebuild our infrastructure and redesign how the poorest among us live. Because that poison isn’t underground. It’s bubbling up, literally for too many of us. It’s the skeleton hand grabbling out of the ground, flickering on the TV, moaning from the closet. It’s the skittering footsteps on the creaky floor. It’s our past, destroying our chance at being a nation, truly free and just nation.

4 thoughts on “Sins of the Fathers: East Chicago’s Poisoned Water and The Weight of History”